I have wanted to map out the fields for a while now.  I have only lived here for 3 years and have not yet become acquainted with the farm’s nooks and crannies. Today’s  Random Act of Wildness offered me the perfect chance to do just that. Not exactly OS standard of map drawing, and it is most definitely NOT to scale, but hey ho…it’ll do! 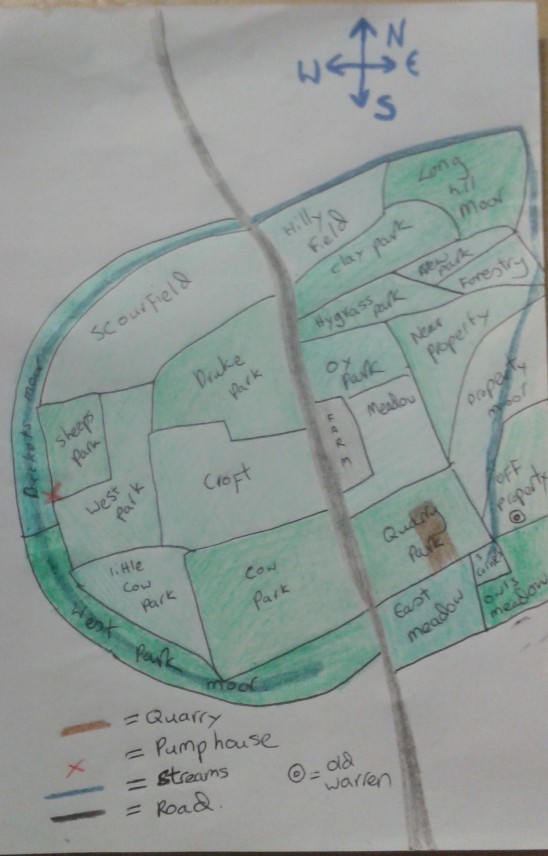 F is always saying ‘I’m going to move the fence in such and such field’ and I nod along as if I know exactly where he is headed. In reality I only ever remember about 3 of the fields by name.

The Quarry is pretty easy to remember. It is one of my favourite spots, mainly due to the fact that every time I walk across it I think of the Roman remains lying inches below my feet. The field takes its name from the abandoned stone Quarry in the middle of it. Nothing has been dug from here in living memory, and Nature has slowly reclaimed the site . A dense thicket of hawthorn, hazel, gorse and briar fills the basin of the quarry. In amongst the tangled undergrowth live foxes, rabbits and badger. In spring and early summer Native Bluebell cover the eastern edges of the Quarry in a carpet of azure blue.

The forestry field is a 10 year old plantation of mixed woodland, which exists solely because the land is too steep for modern farming machinery. Years ago it was farmed, with horse and plough able to manage the angle of the slope. Now the trees form a canopy over  dense Bramble, elder and nettle undergrowth.

The farmyard itself provides homes for many wild beast and fowl. We live on a farm….rodents are everywhere! Brown rat , field and house mice are often spotted dashing from hiding spot to hiding spot, trying not to be seen. Bats roost in the 200 year old barns and whizz around the yard at dusk, snapping up insects that multiply in the manure pile.  Pheasants stalk in the grass behind the heifer shed. A flock of wild pigeons settle down noisily each night on the roof of the cow shed. Occasionally a Sparrowhawk takes a pigeon , which is amusing to watch as they are much bigger than him!

Summertime sees the Swallows return, the air filling with their clicking and whirring calls. Starlings arrive in late October, gorging themselves on the barley used to feed the cows. Buzzard and red kite are frequently seen soaring overhead, especially over winter months and after hay is cut.  Little owls during the Spring to screech outside the farmhouse in the small hours. We suspect they nest in the old ash trees that occupy the Meadow and Ox Park hedges. Barn owls are also seen later in the summer, hunting along the hedgerows and calling to each other across the fields. Their shrill cry sends a shiver down my spine.

As I found out by doing the bioblitz that our garden and the sheds around the farmhouse are home to many creatures. We have seen great tits, blue tits, chaffinches, robin and sparrows on the feeders. Dunnock and wren fight over the spillage from the bird table. Collared doves are currently nesting in the hedge behind the immature oak.Thanks to our first attempt with the camera trap we know that there is a family of magpie, with two fledglings, here too.

Jackdaw are everywhere on the farm at the moment, the nest in the feathering loft has fledged at long last.

The log pile is our mini beast ‘Hilton hotel’. The meadow patch is wilder than ever at the moment, thanks to the recent wet and humid weather.

Business at the bee café is swift, and the ‘menu’ has expanded since the Scabious has finally flowered. Over the past month I have also become aware of (and showered curses upon) the large slug and snail populations residing in the garden.

Thanks to the 30 Days Wild project, I have finally had a chance to take stock of what coexists with us on the farm. It has also made me realise I know the farmland a lot less intimately than I would like to! Hopefully this will be the start of getting well acquainted with the rhythms of the wildlife that live on our patch of Wales. 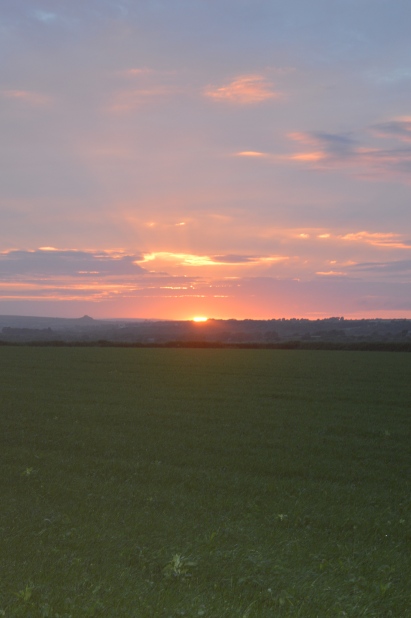