This morning I had Ospreys in my kitchen. Ok, ok , it was on a webcam, but it was still pretty cool.

Today started off as another bleak rainy grey day. Hunkered down in the kitchen with my morning coffee I wondered how I was going to fit something wild in without getting absolutely soaked. Fortunately my random act of wildness cards held the answer: Watch a wild webcam (Peek at Osprey, Peregrines and other wildlife). 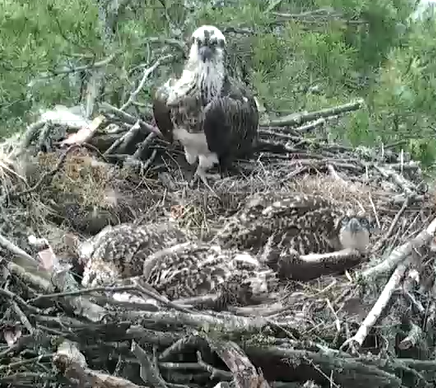 I decided to take the card literally (as baby brain and sleep deprivation make independent thought tricky) and typed ‘Osprey’ into the search engine. The first webcam that popped up was the Scottish wildlife trusts camera on the loch of the lowes. I opened up the website and settled back to finish the rest of my cuppa. My kitchen filled with the sound of wind blowing gently through the boughs of the Scots pines on my screen. The sound of birdsong mingled with the occasional noisy goose honk from the lake below. I counted 3 large, dappled chicks, spread eagled in the nest. A large adult stood guard over the snoozing chicks, crest feathers ruffling in the breeze. I sat and watched in amazement. I couldn’t quite believe that ,thanks to the wonders of modern technology,  I was able to watch live feed streamed from a camera pointed at an eyrie hundreds of miles away in Scotland. In my opinion, this is what the internet is made for! 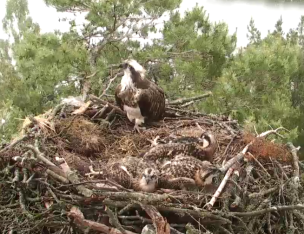 After 10 minutes the chicks suddenly sprang to life. There was lots of wing stretching and preening as the chicks woke, and wobbled around the nest. Shortly after I was excited to see the other adult bird return, to a chorus of cheeps and shrieks. I could have sat there all day, but unfortunately I had lots of boring chores to get through before C came home from nursery. 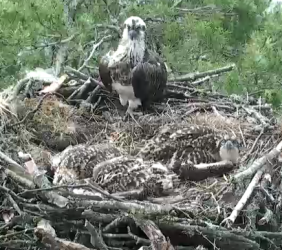 In the meantime I have managed to learn about the family in whose nest I was a ‘fly on the wall’, thanks to the rather informative blog running alongside the webcam. Loch of the Lowes has been home to Osprey since 1969. The female on this nest, known by the rather catchy LF15, is a relative newcomer who arrived in 2015. LF15 replaced ‘Lady’, who had nested on the Loch for the last 24 years, but didn’t return from North Africa this breeding season. The Average lifespan of an Osprey is 10 years, and Lady was estimated to be 28! She had clocked up an impressive 129,000 flight miles and successfully fledged 50 chicks in her lifetime. LF15 now has her own brood of 3,  . Her mate, LM12 is also new, with an unknown history. 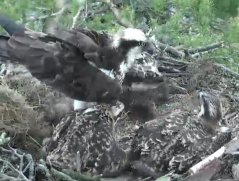 I couldn’t distinguish between th adults well enough to work out which bird was which. Apparently female osprey are 20% bigger than males, and have a ‘necklace’ of brown feathers on their chest.

I did check back  later this evening. One parent was still on guard, resting on one footing with the other leg tucked up under its body. The chicks were all asleep; the camera quality was so good I could count their breathes. Suddenly the adult started ducking and twisting its head at something off camera. It let out a rapid high pitched ‘chee chee’ call-a warning or a welcoming call? I wasn’t sure. I waited a while in case the other adult arrived back in the nest with dinner, but nothing more happened and the adult settled back to resting.

I’m definitely going to have to tune back in to this webcams again.It was a refreshing change to my usual Monday night of channel hopping, trying to find something semi decent to watch.From now on i’ll be watching ‘Osprey Cam’!